This indicates a persistent high blood pressure without an apparent cause. It occurs in persons between 40 and 70.

The main manifestations are a vertical (on top of the head) or occipital headache, occipital stiffness, giddiness, tinnitus, irritability and, in a few cases, epistaxis. The main sign is, of course, a raised diastolic and/or systolic blood pressure. However, it is not at all uncommon to see patients with raised blood pressure without any of the above symptoms. The headache from hypertension can occur either on the top of the head or on the occiput and is accompanied by a pronounced stiffness of the neck muscles.

Secondary Hypertension
This a raised blood pressure secondary to other factors, the most frequent of them being chronic glomerulonephritis.

The main manifestations, apart from a raised blood pressure and a headache, are an ache in theloins, tiredness, oedema and albuminuria.

The Chinese medicine view of hypertension leans strongly towards seeing it as a pathology of “rising Qi” in the form of Liver-Yang rising, Liver-Fire or Liver Wind occurring against a background of Liver- and Kidney-Yin deficiency. Indeed, most books say that hypertension may be equated to the disease entities  of “Headaches” and “Dizziness” in Chinese medicine, therefore the emphasis is very much on the head as the seat of pathology of hypertension. 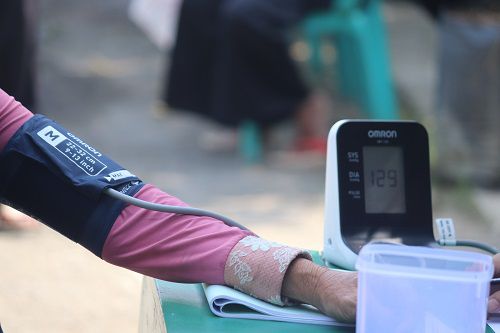