The lower back is the area between vertebrae L1 and S3. Lower back pain may occur on one side, or both sides or only in the middle, or even over the entire lower back, but it is usually on one side only. Most people have experienced lower back pain at least once in their lifetime, so it is a common complaint in everyday practice, especially in the developed countries.

In Western medicine, lower back pain may be encountered in many departments, including internal medicine, surgery and gynaecology. The causes can generally be subdivided into four groups:

4. Local causes including disease and disorder in the deep-seated organs – for instance, kidney disease including nephritis, pyelonephritis, nephrolithiasis, nephroptosis, hydronephrosis, pyonephrosis and renal tuberculosis, or other diseases such as pancreatitis, penetrating ulcer, cholecystitis, cholelithiasis, retroversion or retroflexion of the uterus, endometriosis, chronic annexitis or chronic prostatitis.

Lower back pain often implies different causes, at different ages; for instance, in growing boys and girls  there could be weakness in the lower back, whereas a feeling of extreme weariness every day may be associated with slight lateral curvature of the spine. In elderly people, the commonest cause is osteoarthrosis, which is associated with permanent rigidity of the back especially in the morning, and often with great tenderness to the touch, with or without any deformity.

In young workers, lower back pain that starts suddenly while working (for instance, lifting something too heavy) is mostly due to inappropriate exertion or sudden wrong movement, and the cause is often disc herniation, which produces a severe pain in the lower back, which may refer to one or two legs, with limitation of movement. Influenza may also cause lower back pain, associated with generalised body pain, fever, headache and sneezing.

With the development of modern surgical techniques, operations for intervertebral disorder became increasingly common; in the 1940s there was a large increase in disc surgery; however, in the 1950s it became apparent that a great number of these operations were failing. Failed back surgery may cause unrelenting low back pain, sciatica and other functional impairment.

Generally speaking, according to TCM lower back pain is often caused by invasion of Cold-Damp or Damp-Heat, accumulation of Cold-Damp, downward flow of Damp-Heat, stagnation of Qi or stagnation of Blood, deficiency of the Kidney-Essence. Lower back pain may be attributed to any of the following disorders in Western medicine: renal disease, rheumatism, rheumatoid arthritis, hyperplastic spondylitis, disc herniation in the lumbar area, lower back blockage, lumbar muscular strain or traumatic injury of the lower back region, or deformation or injury of spinal column. 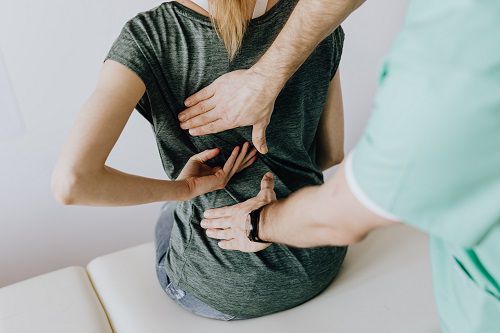